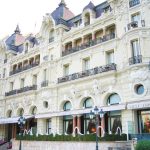 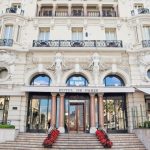 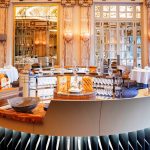 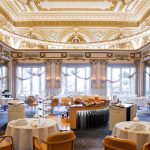 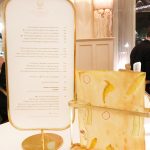 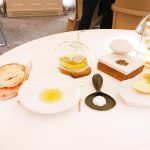 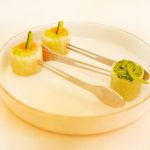 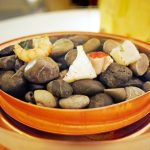 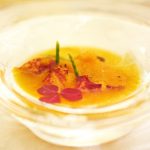 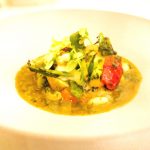 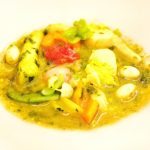 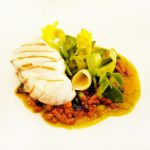 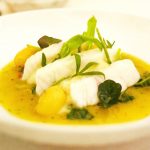 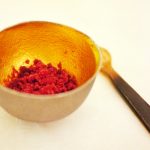 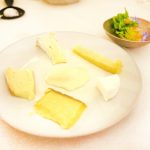 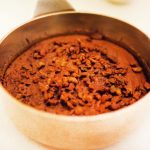 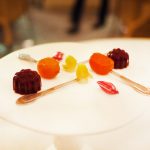 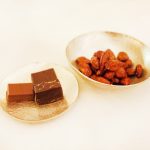 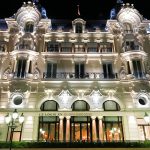 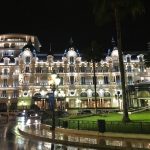 So. There I was: 7:45 pm on a Saturday evening, on the Route Nationale, heading away from Nice Airport towards Menton. It’s about an hour’s drive, and the objective of my weekend trip was to visit Mirazur, a restaurant I’d last eaten at some ten years ago. And then it happened: I’d already passed three exit signs to Monaco, and the fourth was just tooooo tempting. I finally gave in, and took it – I just couldn’t pass by one of France’s best-known Michelin 3-star establishments without at least popping in. I didn’t expect to eat there – the notice was much too short, and no tables would be available – but it would be great to see the place again.

Situated right in the heart of Monte Carlo, Le Louis XV is on the ground floor of the Hôtel de Paris. It was here, in 1989, that Alain Ducasse was awarded his first Michelin 3-star, making the Hôtel de Paris the first hotel restaurant ever to earn Michelin 3-star status. Its dining room, decorated during the 17th century in the Versailles style, was the most magnificent restaurant setting you can imagine. More than a decade later, Ducasse became the first ever chef to have three Michelin 3-star ratings against his name: Monte Carlo, Paris and New York City – all of which were situated in a grand hotel with an extravagant dining room.

My last visit here was five years ago, before the hotel underwent a major renovation. I’d heard that the Versailles “hall of mirrors” décor had been stripped out, and replaced with a modern design, more aligned with the 21st concept of luxury. I was interested to see how it looked. And that’s all I expected, really, because – as I’ve mentioned – I didn’t have a reservation.

When I entered the hotel, it was almost 9pm, and dinner was well underway. I was about to take my peek at the new dining room, when a young receptionist – clearly realising I wasn’t a hotel guest – appeared, and reminded me that I needed a reservation. Suddenly, it struck me – while it was true that there would be, almost certainly, no free tables, I might as well try my luck. After all, if you don’t ask, you don’t get.

So I asked. And, to my huge surprise, I got. It wasn’t immediate, as the receptionist had to check with the manager that the table she had in mind – the result of a couple’s no-show that evening – was still free. In due course, she returned with glad tidings, and I was shown to my small, but precious, table. For a minute or two, before the menu arrived, I sat and reflected on my good luck. I could hardly believe it. Not only was I to have another Alain Ducasse experience – as a walk-in on a Saturday evening! – but I also had my suit jacket with me. So I wasn’t underdressed either. Well, not too drastically, anyway.

My first impression of the new dining room was that it had lost some of its previous charm, largely due to a less golden décor and lack of sparkling chandeliers. But it still exuded class. The massive bread station in the centre was a perfect example of the Ducasse ‘over the top’ philosophy – i.e. making sure everything is done in the most elaborate way. The bread service, for example, included a choice of eight types of bread, two choices of olive oil, three of salt – and even the black pepper came with a long explanation of where it had been sourced, before being freshly ground in front of diners. And the tea service is equally elaborate, consisting of a herbal tea trolley showcasing more than 10 fresh plants. After you’ve made your choice, the waiter carefully cuts it from the plant, and rinses it, before infusing your choice of herbs.

So, yes. Here, everything is a bit of a show. But what’s wrong with that? It’s what most diners want and expect – and I’m among their number. I happily confess to being a sucker for this kind of indulgence once a while.

Let’s talk about the food…

Every aspect of the dining experience here has a Wow Factor, but the least equal Wow factor at Le Louis XV has to be the food. Now, don’t get me wrong: it’s not bad, or substandard, in any way. In fact, in many respects, it’s very good. But it’s not – as one might expect in a place like this – extraordinary in any way. And some parts were distinctly unusual. Or, to be blunter about it, downright odd.

Take the amuse bouche, for example. This consisted of small pieces of seafood, steamed on hot pebbles, in such a way that actual steam came out from underneath, filling the surrounding air with a decidedly icthyological odour. This, according to the waiter, was deliberate, as the idea is to create a “fish market” experience for the diner. But the last thing a diner – well, this diner – wants to experience during his meal is a strong and rather unpleasant fishy smell. Strange idea!

Another amuse bouche was a piece of lobster in melon broth. The lobster was precisely cooked, true, but the melon broth was way, way too sweet and it had a hint of spiciness. Not, I’m afraid, a great start to the meal.

And so to the first course – a vegetarian dish. This, to my surprise, turned out to be my favourite course of the evening, by far. It was a minestrone, made with lots of goodies. These are too many in number to mention, but they included tomato, carrot, celery and basil in the broth, and it was served with artichoke, asparagus, radish and white beans. In all, a very comforting and hearty soup, packed with flavour. This was followed by sea bass, and I selected turbot rather than meat for my main course. This, the turbot, was accompanied by a delicious shellfish sauce, which had a touch of lemon acidity that brightened it even more. The whole dish was served on a bed of clams, which I quite enjoy. It was a course that captured Alain Ducasse’s usual style perfectly – simple but refined.

The meal continued with a refreshing palate cleanser of green apple granita before my final course of a softly-baked chocolate cake, which made a nice warm and rich finish to the meal, followed by the cheese trolley.

Le Louis XV used to be one of my top five favourite places in the world, with its glamorous (original) dining room, faultless cooking and a highly professional team of staff. Now, I’m not so sure. While the service was as every bit as smooth as before, the modernisation it’s undergone is rather a shame – though it’s still a stunning place – and the cooking was excellent without being exceptional. Sadly, none of the dishes really stood out – and the amuse bouche definitely left something to be desired! Still, it remains a place that worth visiting on those very special occasions.

Finally, it’s worth noting that, if you do want to experience an elaborate meal in this legendary dining room, the lunch menu is easily the most affordable way of doing so.