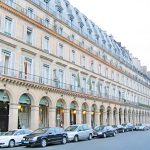 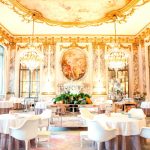 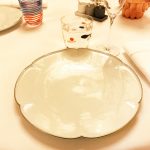 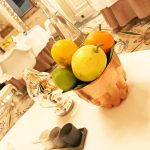 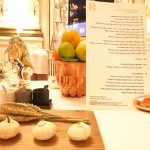 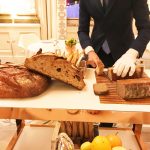 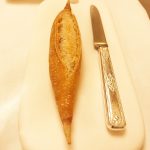 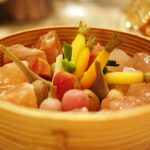 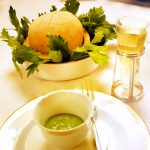 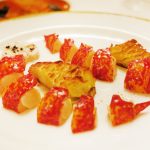 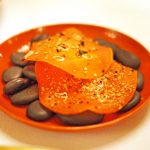 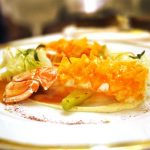 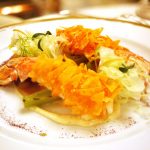 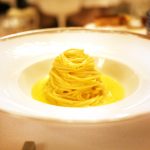 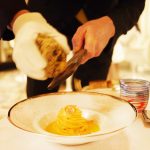 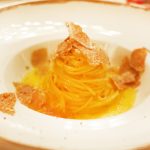 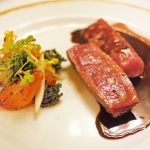 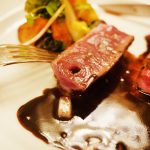 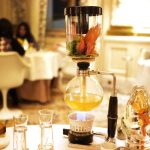 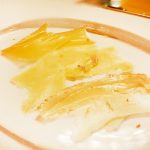 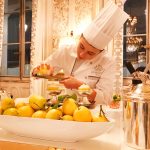 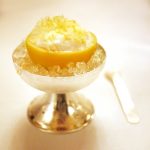 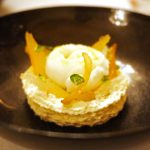 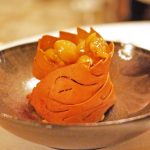 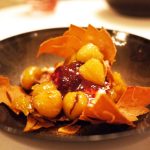 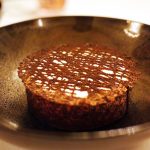 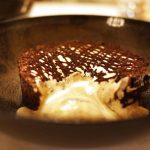 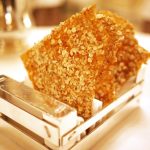 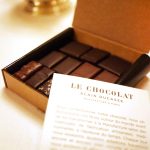 In Paris, during 2013-14, the entire world of Michelin 3-star kitchens seemed to be engaged in a game of musical chairs. First, there was Chef Yannick who, after 10 years at Le Meurice, announced his departure in 2013. Around the same time, Chef Christian left Ledoyen to take on a new role at Le Cinq, leaving his place open which Chef Yannick took it on. In the meantime, Le Meurice was taken over by Alain Ducasse. But the game wasn’t finished yet. To win back Michelin 3-star status for Le Meurice (it’s currently 2-star), Ducasse lured Chef Jocelyn back from London’s Dorchester hotel, as he (Jocelyn) had already proved his ability by achieving 3 stars at Ducasse’s establishment in London. And that’s where we’re at today.

Well, for a start, it’s got a history. In fact, it was the first palace hotel in Paris, and has hosted numerous kings, sultans and other celebrities, such as Salvador Dali and Elizabeth Taylor. But, while these people are illuminated by fame, every guest – famous or not – is treated like royalty while dining in this spectacular and truly grand dining room. It’s so over the top that they even have menu holder on the table to save you soiling your hands when choosing your meal!

As to the food itself, both seafood dishes were perfectly done, and the Brittany lobster was precisely poached, resulting in a soft crunchiness at its centre. The finish – a rich, black garlic bisque – was also expertly prepared.

The best course of the evening, though, was the langoustine – so fresh that it melted in the mouth without so much as a bite. There was an excellent contrast in textures, too, as it had been lightly fried before being coating it with tapioca crisps. It was like eating the langoustine with its shell. A further lift to this already amazing dish was provided by the refreshing fennel and lemon vinaigrette.

So, yes, both courses were excellent. But let’s face it, at the staggering price of €135 per course, perfection is something you expect, rather than hope for. Anything less than excellence would, at that price, have been a disgrace.

Oh dear! Where to start? Sadly, there’s a lot to talk about here. First, though it may seem hard to credit, they don’t even make their own baguettes or petits fours! In fact, the baguettes are bought in from Frédéric Lalos, while the petits fours was just a small box of chocolates from Alain Ducasse’s shop – they weren’t even presented on a plate! Given that the pastry chef here is Cédric Grolet, acclaimed as the World’s Best Pastry Chef in 2018, I found this quite a surprise – not to mention something of a let-down.

Then came the amuse bouches, one dish of which was a Chinese bamboo basket full of cute-looking baby vegetables. I was expecting crunch and flavour. But what I actually got was a soggy mess – the vegetables had been so completely overcooked that they’d became completely mushy! I mean, come on! Even microwaved-from-frozen vegetables are crunchier than this!

Then there was the wine. After browsing through their “telephone book size” wine list, I asked the sommelier to recommend a wine (by the glass) for both my seafood starter and meat main course. He advised me to choose, respectively, a Meursault white and a Saint-Émilion red, telling me that each would pair perfectly with the dishes I’d chosen. I’m sure, it was a “pure coincidence” that these were the two most expensive choices on the Wine By Glass list. Each was circa €60! So I decided to trust my own judgement, and ignored his suggestion – I simply pointed to what I like, a German Riesling and a Rioja. This roughly halved the price.

Another let-down – to put it mildly – was the white truffle. Now, as you may know, white truffle has a very short shelf-life. This is because its culinary value lies in its aroma, which doesn’t last long (a few days at most) after it’s dug from the ground. No reputable chef should use white truffle unless they can guarantee to get it from soil to table within this short ‘aroma window’. This is why many restaurants jack up the price of pasta dishes with white truffle. And Le Meurice was one such restaurant – they charged an eyewatering €150 for the paste! Still, we decided to go for it – after all, this was an Alain Ducasse’s establishment, wasn’t it? Well, we soon found out what could go wrong. Although the white truffle (so they said) was sourced from Alba (an area famous for growing the fungus) it was, by far, the weakest example of it I’ve ever had. Also, judging from experience, they didn’t even use more than 4g of the stuff. So – that’s €150 down the drain!

When the venison loin arrived, it bought with it a small ray of hope that things were improving, as it was cooked to a nice medium rare and was interestingly punctured with a few holes stuffed in with pieces of lardo. Sadly, the fat didn’t save the dish from being the blandest of the evening – the meat was simply crying out for seasoning.

For dessert, I opted for Kopi Luwak, as I’d never had it before. It sounds pretty disgusting, as it’s a way of making coffee using (coffee) cherries that have been through the digestive system of a civet (a small, tropical mammal). The fermentation process, as the cherries pass through the animal, are thought to enhance the resulting coffee. Hmmmm. Anyway, what the hell, you only live once – I thought I’d give it a go. It arrived in the form of a disk of gavotte pastry, filled with coffee cream. I did taste a bit of the coffee, but got little from it, as it was overpowered by the cream which made up most of the dish. It was too sickly to finish it all. The World’s Best Pastry Chef? Really?

So much for the food – what of the service? Well, I can’t honestly say it was a whole lot better than the food. When, for example, I couldn’t decide whether to have the lemon or the coffee dessert, I asked the waiter for a bit more detail on both. All he did was to look at me impatiently and say: “so, Lemon or Coffee?” I wasn’t impressed. Also, despite the fact that there were lots of staff serving only 30 or so diners, the organisation felt chaotic at times. On one occasion, when they were about to serve the table of four behind us, none of the staff knew who had ordered what, so they simply guessed. But they got it wrong, and had to shuffle the dishes around the table until each guest got what they ordered. Totally unacceptable at this level of restaurant.

Finally, while it may be quite a neat idea, at least in principle, to use a bit of performance as a way of entertaining diners, they shot themselves in the foot by trying much too hard. For the amuse bouche, for example, a chef came out just to cut the celeriac. Why? And for the lemon palate cleanser, a young member of the kitchen staff wheeled up a trolley simply to show how the foam was squeezed out and the how the zest was grated to garnish the lemon. (A mother of pearl caviar spoon was provided for this small palate cleanser, but it’s worth noting that there was no actual caviar in any of our courses, despite the price of the meal.) Probably the silliest thing they did was to bring out a laboratory distiller for the consommé – something that was completely out of place in such a classy place. It was ridiculous. A similar thing could be said of the bamboo basket full of vegetables. I mean, really? The basket didn’t even look new or clean.

. . . It’s not a place I’d recommend. The lack of creativity in the cuisine is hardly representative of the finest in French cooking, and those in the frankly sloppy service team are, quite clearly, less than passionate about their job. When I watched our own waiter working, I found it hard not to think: “What a poor guy, he’s in the wrong industry.” Rather depressing.

The cost was pretty shocking. One expects, of course, to pay for quality, but we hardly got that here. In fact, I’d go so far as to say that this was the worst value for money restaurant (along with Sushi Shikon in Hong Kong), that I’ve ever encountered. In my view, an extremely dull 5-course set menu (shellfish, fish, chicken, cheese and dessert) for €380 is simply extortionate – which is why we opted for the 3-course a la carte. Even this costs €300 per head – but at least you don’t have to suffer the boring chicken course in the set menu. Despite all this, you might enjoy a visit to the stunningly elaborate dining room. If you decide to do this, I’d recommend you try the 3-course set lunch. You don’t get much, just a langoustine claw salad (just the claw, not the body!), a small piece of fish as the main, and a simple dessert. But, at €135, it’s reasonably good value relative to dinner menu.